MCN Build is a Great Place to Work®! 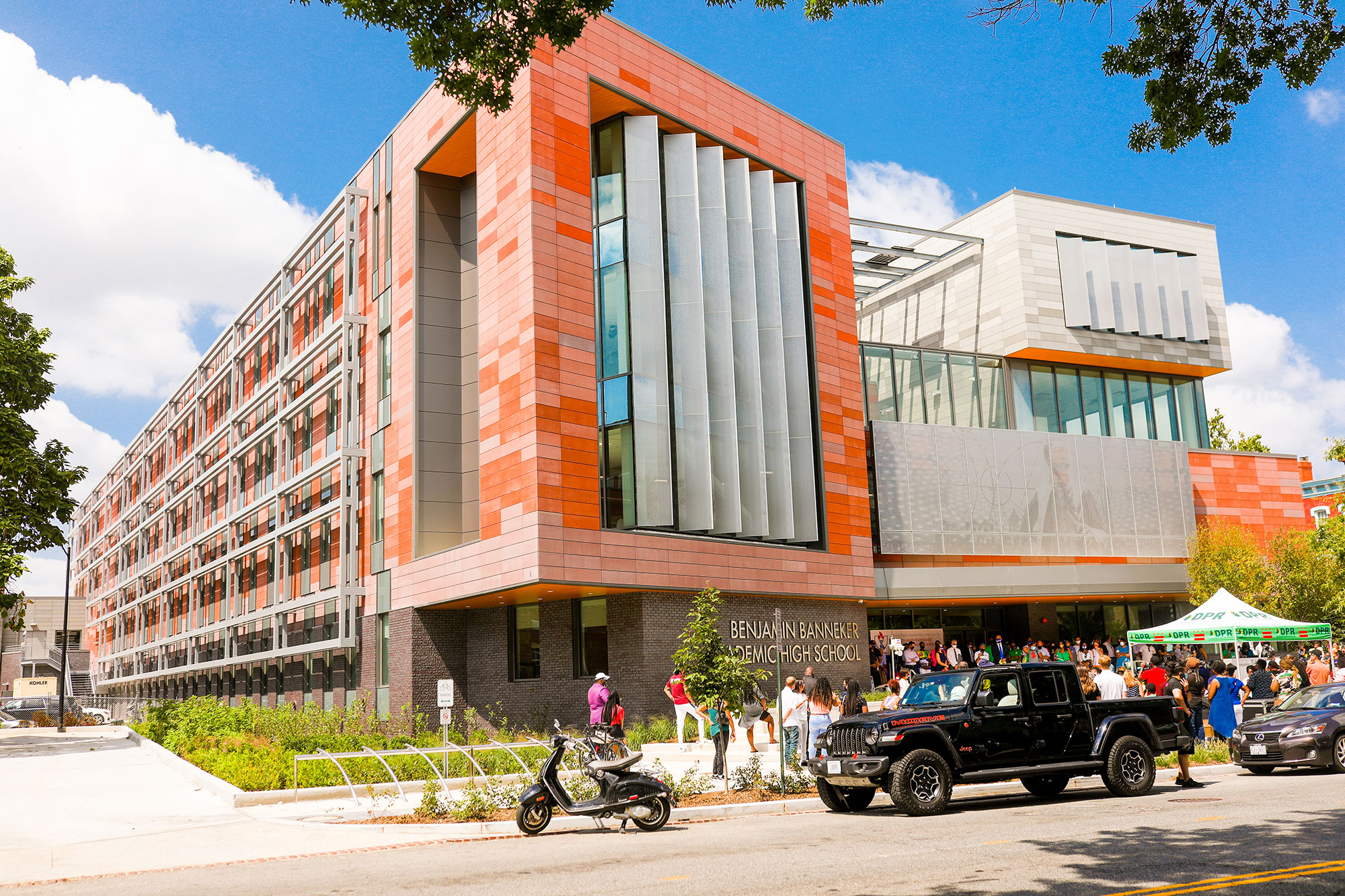 Banneker Academic High School is one of the first Net Zero Energy (NZE) Public Schools in the District. The high-performing school was built to align with Mayor Muriel Bowser’s Sustainable DC Initiative to make “the District the healthiest, greenest, most livable city for all District Residents.” Sustainable DC outlines goals with actionable targets spanning from energy and water to equity and education, addressing the sustainability requirements and the concerns of residents and community disparities. Specifically in this plan is an action item for Net Zero schools.

The District’s NZE manual for green building will be based on the groundbreaking practices from Banneker. The new educational facility was brought up to date to the current District education specifications, including specific square footage per student, minimum cubic feet per minute (CFM) of outside air coming in, and specific educational tools and layout characteristics all brought to this standard.

The state-of-the-art facility has an open atrium at the heart of the school, well-lit classrooms, collaboration areas, gymnasium, auditorium, cafeteria, coffee shop, science labs, studio and performing arts spaces, and outdoor learning areas. The District has a stormwater management manual, a green building management manual, and various other guidelines that were also followed.

An NZE school is a building whose total energy usage is equal to or less than the energy it generates, meaning the building does not take energy from the grid and is self-sustaining. A building typically achieves this through two main strategies: reducing its energy usage demands and producing any energy needed through renewable sources. Key components that accomplish these strategies on an NZE school are solar elements, supplemented by other features that allow end-users to monitor the building performance needs. There is also an opportunity for the school even to return power to the grid when their solar panels produce excess power not needed to operate the school. 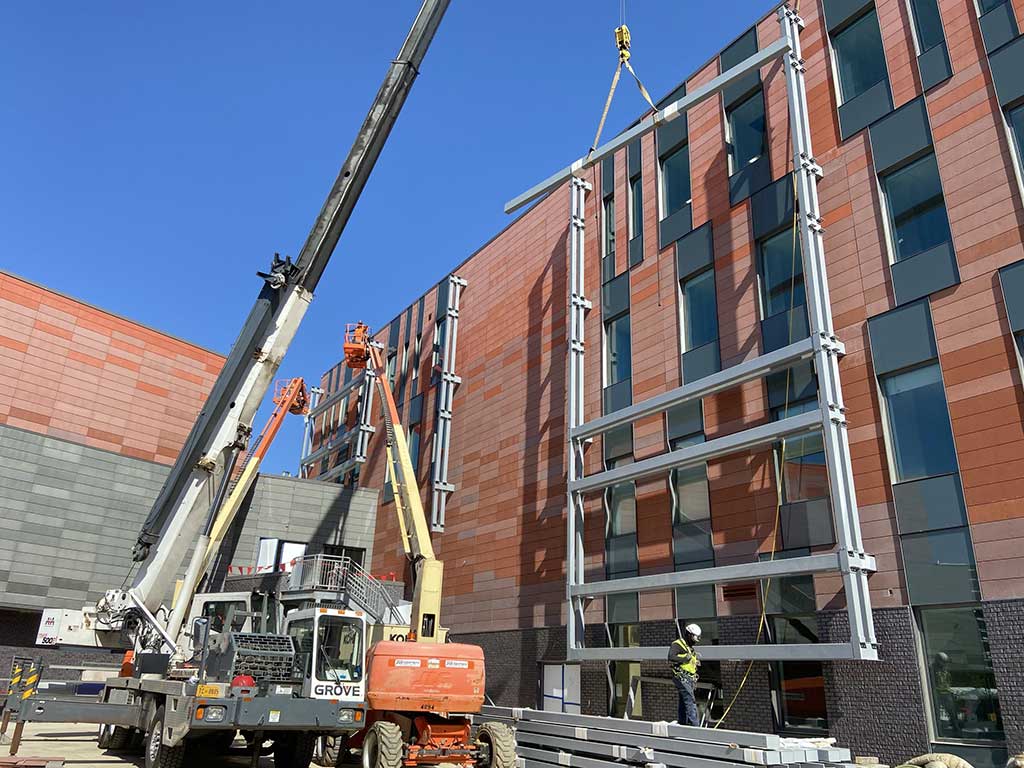 Banneker was delivered as NZE Ready, which means we have installed all the infrastructures in the building to allow it to meet NZE criteria. All that remains is the installation of solar panels. Solar panel racks are in place in preparation for when the District awards the school solar panels as part of their city-wide solar strategy. Once the panels are installed and functioning, the school will be operating as an NZE building. Solar panels contribute to our NZE goals as renewable energy credits (RECs), which are the energy generated by renewable energy sources and are the real value in NZE.

In addition to solar panels, Banneker has super-efficient systems in place. Heating and cooling for the building is based on water source heat pumps. The geothermal well system is a system that loops water down 500 feet underground where there is a constant temperature all year round. This constant temperature cools or heats water depending on the heating or cooling load needed. This system uses significantly less energy than a traditional HVAC system.

At Banneker, there are 125 geothermal wells on-site to help heat and cool such a large building. The school has heat pumps for every three to four rooms, so there isn’t a sizeable central system – no large fans or cooling towers that you would typically see.

The building incorporates a series of strategies around daylight, thermal comfort, acoustics, and indoor environmental quality to generate a high-performance learning center. Outside air is brought into the school through a central DOAS that provides air to the building generally but can target specifics areas as the loads fluctuate.

Remember getting drowsy during class in the afternoon? This is because the oxygen levels in the classroom fall. We’ve incorporated sensors that detect the CO2 levels in the classroom. Once they get low, fresh air is circulated back into the classroom – one of the many features contributing to our LEED strategy on this project. The primary focus is the health of the students and ensuring a safe environment. We also performed indoor air quality testing to ensure no residual volatile organic compounds (VOCs), harmful odors, or contaminants were flushed out before the school is turned over.

Banneker Academic High School’s design honors the legacy of Benjamin Banneker and compliments the neighborhood’s architecture. Benjamin Banneker was an African American scientist, surveyor, almanac author, and farmer. While working in the District, he became associated with the law enforcement who laid out the original city.

Throughout the school, there are several design elements to honor and celebrate Benjamin Banneker. The terrazzo flooring that was installed in all circulation areas was carefully detailed to visually reflect the grid system that the school’s namesake helped within the late 18th century. Banneker was also a watchmaker, and in the school’s atrium, there is a global watch hanging sculpture to celebrate his achievements. The state-of-the-art high school also features a rooftop terrace with a garden for students, a community skatepark, and a community dog park. 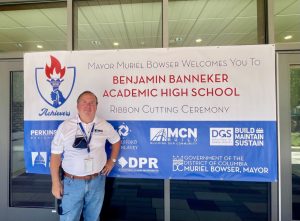 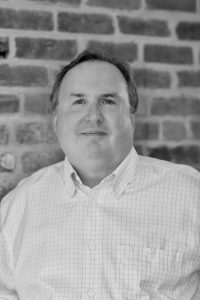 Andy Doyle has over 40 years of construction industry experience. He skillfully manages projects with a clearly defined strategy while overseeing performance and encouraging team morale, from educational renovations to interior fit-outs. Andy maintains valuable working relationships with clients, architects, and subcontractors, resulting in successful projects delivered on time and within budget. Andy has spent his whole career building projects in and around the District. The Banneker Academic High School project has been the highlight of his career.